Kris Cook, president of KC Power Clean, explains how they went from a costly paint spill to a successful business leveraging social media and new markets.

It was not the happy-go-lucky final day of college most graduates dream of.

“My girlfriend was taking a mirror down from a wall in the apartment we were vacating and ripped some drywall off. We decided to patch and paint it ourselves,” begins Kristopher Cook of KC Power Clean. “Later, when we were packing stuff into the back of our car, I spilled some of the leftover paint. Not knowing what I was doing, I tried to clean it up with a hose and wash it down the drain. Then we went for lunch.”

By the time the pair had returned, no less than four city-operated environmental rigs were on-site to clean up the storm drain. “I knew right away I was in deep shit,” he recalls. Cook was told that if he didn’t pay the $5,500 clean-up tab by 8 a.m. the next morning, the case file would be turned over to the city—by the time they added administrative and legal fees, the payment could skyrocket to more than $17,000.

Could your margins be better?

Try our free 3-in-1 profit margin calculator and find out.

“I got my dad on the phone and he vetted things. Turns out, it was the real deal. I didn’t have the money, so dad ended up paying the bill,” says Cook. “To pay him back, I went home for the summer and started washing windows in dad’s janitorial business.”

Pretty soon, Cook realized that he could make three or four times the money he was being paid as an hourly employee by working with clients directly. “So I told dad; Thanks, but I’m going to start my own company now.”

And that’s how KC Power Clean of Brea, California was born.

Learn more about running and marketing your business, hiring employees, and building a successful pressure washing company with our free resources.

In the beginning, KC Power Clean was Kris, a ladder, a bucket and a squeegee.

“After about three years, I bought a power washer from Home Depot so I could wash walls as well as windows,” says Cook. “It was just a little, one gallon of gas thing. You were supposed to pour the oil into a little reservoir, but I didn’t know that, so I dumped it right in with the fuel.”

Right away Kris made another emergency call to his dad.

“He was like, You idiot! But we managed to drain it out onto a cardboard box and get it working again,” Cook laughs.

By 2009, Cook had parlayed the utility of that tool to become a full-fledged power washing company. Things progressed from there until 2014 when KC Power Clean was approached by Starbucks, who were looking for a local supplier to strip paint from their drive thru. This, in turn, led to an opportunity to provide the accompanying sandblasting service.

“So we went out and got a couple trucks for that,” says Cook. “It was a sink or swim moment – getting into sandblasting that way – and it ended being a great pivot.”

Keep learning how to run a 5-star business with our bi-weekly email.

“It can be challenging from a marketing standpoint to always get our message pointed the right way,” says Cook.”We have a couple different web domains and emails now for the various markets. The key is finding a way to appeal to each buyer without detracting from their experience, or confusing them with stuff they’re not interested in.”

To help get the word out, KC Power Clean employs a variety of digital tools, including Google Adwords, Facebook and Instagram. “Instagram is such a great way to show what we do with the before and after pictures. We use it like our visual library. Seeing is believing.”

Customer reviews and referrals also play an important role in keeping Kris and his team busy. “We love the client follow-up feature in Jobber,” he says. “Being able to see those ratings from 1 to 10 help us thank the customers who rate us high and rectify things fast for those who may not. That feature alone has probably helped us to eliminate on headcount in the office.”

Always seeking ways to intelligently scale the business, KC Power Clean has developed an excellent ‘foot-in-the-door’ approach to sales based on providing little samples of what they can provide.

“By the time people call us, they’ve usually done a bit of recon and know what they’re looking for. At that point, winning the business is really about proving to them that you can deliver the results they want,” he says. “So, we’ll take a rig out and do maybe a two foot by two foot patch on their driveway, or brickwork, for a nominal fee just to cover our expenses. Once they see what we can do, we usually get the deal.”

That ability to generate will serve Kris well as a business owner and new dad himself. He and his then girlfriend, now wife, welcomed their first child not too long ago. “And maybe more on the way,” Kris says.

For budding entrepreneurs like himself, Kris offers this advice:

“Don’t be afraid to invest in yourself. It’s just usually a matter of time before it pays off. Once I started to believe in me, life started treating us better.”

Lightning round with KC Power Clean!

What is your favorite Jobber feature?

I’m in love with the new quote approval feature. I also really like to queue my visits in the unscheduled area on the calendar.

What is your top marketing channel?

AdWords for residential contracting. In 2000 I used an analytics program on my own, then I took a break from that and started using AdWords Express in 2014. We grew to a size where we were eventually able to contract someone to do that for us.

What is the most valuable tool in your work toolbox?

One of our rigs has both hot water power washing and media blasting, which is rare to see, and provides end-to-end exterior cleaning and restoration service. A lot of jobs we do require both services, or the customer isn’t sure what will be required beforehand. This one truck allows us to deal with both situations.

Outside of work tools, what would you never leave home without before a day in the field?

When we were working on the Starbucks project we were living on the road, so we bought everyone a tactical backpack. My backpack helps keeps me organized, and using it means everything is in the same spot: my phone charger, phone, laptop, snacks, notepad, trifold brochures are always there. It’s my little mobile carry unit.

What’s your favorite way to unwind after a hard day’s work?

We recently had our first child, who is now a 15 month old tornado. Coming home to him makes it really easy to turn off now. There may be two more on the way! We just found out. Every day I think “Another day, another dollar. Back to the grind.” 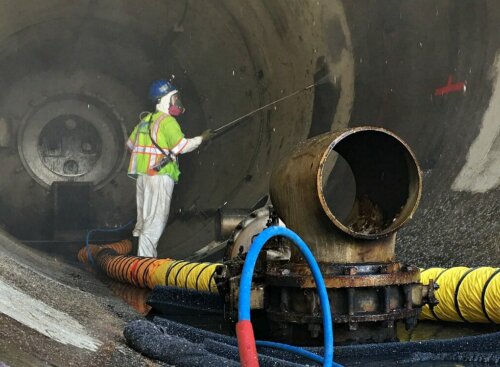 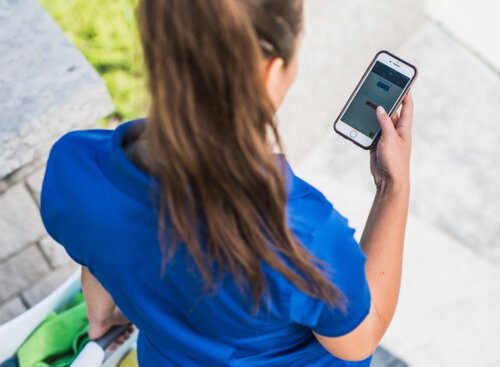